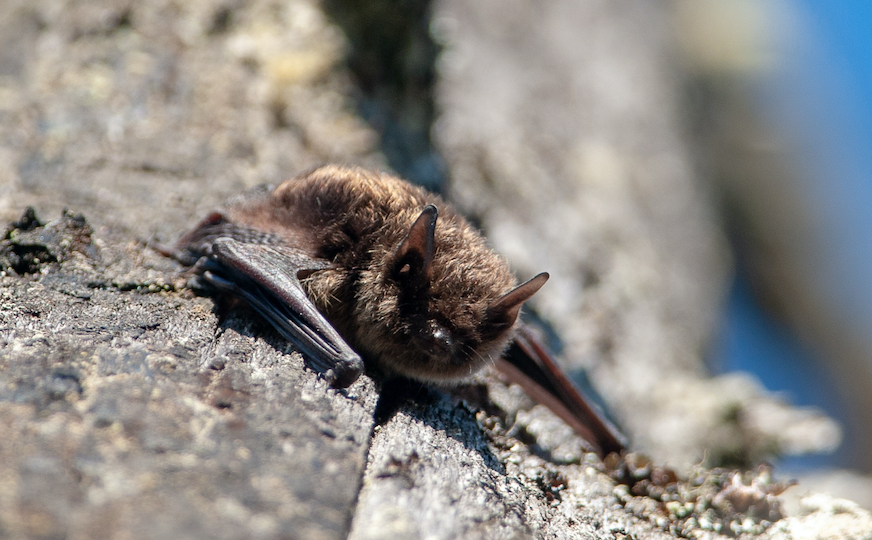 The little brown bats are much smaller than large brown bats. Little brown bats are only about 2.5 inches to maybe four inches in length. They also only weigh about as much as a piece of bread! Now that’s crazy! Their wingspan is the largest part of their body; they can spread their wings to 11 inches.

When it comes to what they like to eat most of the time, they feed on wasps and moths, but if there are other insects around, they will feed on them. They simply prefer wasps and moths. When it comes to eating, they can eat more than half their body weight in food! The bat feeds while in flight; they have teeth that can hang on to their food while in flight. They have molars in the back of their mouth that help break the food down. The bats will use echolocation to locate their food. There are times that bats will eat bugs off of other animals as well. If the little brown bats are not able to feed for any given day for some reason, the brown bat will then slow its body rate down with its sleeping during the day to help conserve its energy. If the little brown bat goes more than three days without food, it will become too weak and will die due to not getting enough food.

When it comes to the reproduction part of bats, the female can delay the fertilization of eggs until she is old enough to reproduce, right around nine months of age. When it comes time for the female to mate, she will wait to fertilize her eggs until the springtime and when May-June comes, the bats will start to give birth to babies. Each bat will only give birth to one pup.

When it comes to the big brown bat, there are some differences between the two. When it comes to these bats, they are much larger than the little brown bat. They are up to 1.2 oz in weight, and the wingspan on these bats is impressive at a max of 16 inches, which is rather long! They are much lighter in color from the little brown bat. They also are more common to find around North America. Most of the time, this is the guy that you end up seeing in your home. They will roost just about anywhere. Caves, mines, walls, attics, and any structure they want to call theirs, they will do what they can to get in and make it theirs.

Big brown bats are all over the world, from North America to the Caribbean Islands and even in South America. Big brown bats love to eat beetles and all kinds of insects, but they love their beetles over anything else. When they can’t get beetles, they will feed on moths, flies, and other insects as well. To make sure they eat enough, big brown bats consume at least half their body weight.

Big brown bats must watch where they have their babies due to predators that would love to have a baby bat for dinner. The most common predators are raccoons, cats, and even snakes. Owls will wait until the bats leave the roosts, and then they will fly in and grab a baby brown bat. When it comes to the big brown bats giving birth, they will form what is called a nursery colony. It can get as big as 300 bats in one colony. When the bats have pups, the pups are born blind and with no hair, and they depend on their mother 100%. The babies, or pups, can fly in just a short six weeks.

Big brown bats are able to live as long as 20 years in the wild. However, most of them die in their first year of life due to not storing enough food in their body to make it through winter, so they end up dying due to starvation. When it comes to the big brown bat, it is the fastest bat that there is–  it has been known to get up to speeds of 40 mph which is super fast for a bat!

Little brown bats and big brown bats have some similarities, but they are both great for our ecosystem and help keep the bug population down. When it comes to the little brown bat and the big brown bat, the worst thing they are fighting right now is the white-nose syndrome. It is a fungus, and it is killing the bats at a fast rate. The fungus grows over their mouths and noses, and it will kill bats due to a lack of oxygen. So when you see a bat, call your local DNR or bat removal company and let them come take care of the bat issue for you, so that way the bats don’t get hurt, and neither do you.