Bat Houses Can Be a Huge Asset in Your Yard 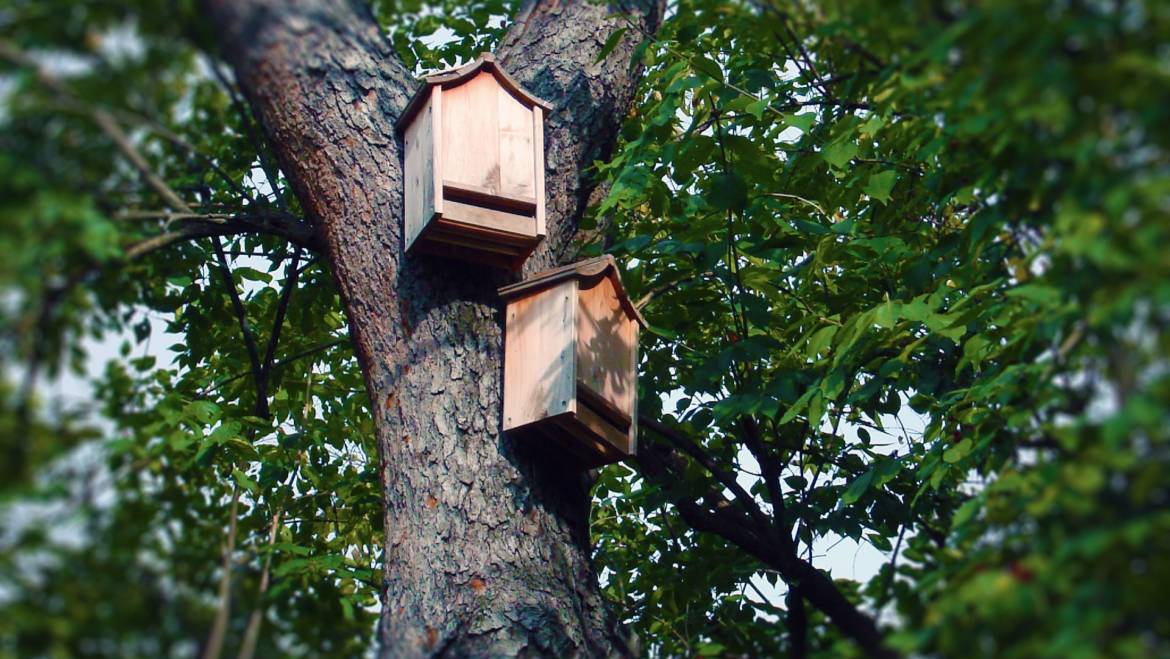 Trees that have died may seem like useless wastes of space, but for many species of bats, dead trees can actually help them. The narrow rough space between the bark and the wood provides the ideal space for a bat to squeeze in nice and tight. If a dead tree is not going to cause any damage to your property, then you might want to consider leaving it so that bats and the insects they feed on have a place to go. If you would rather get rid of the tree, then you can always put a bat house up for nearby bats to live in. There are a few different things that you need to know about bat houses.

When it comes to getting a bat house, you first need to decide what type of bat house you want to put up, such as a single chamber, four-chamber, or what’s called rocket boxes. Once you have chosen the type of bat house that you are looking for, then you need to be able to put it up high enough for the bats. Bats prefer their roosts to be mounted on buildings or other large wooden or concrete structures rather than those mounted on poles or trees. Bat houses that get mounted on a pole work as long as it’s in a climate that is moderate to hot, without any extreme variance between day and night temperatures. Bat houses need at least six hours of daily sun exposure.

Where To Put Your Bat House

When looking for the best location for bat houses you may want a big space. These creatures would love to have more than one house together because they like having the option to go back and forth into new homes. Bats also like to stay within their colony. When putting up bat houses, make sure that it is 30’ from the nearest tree and at least 10’ from the bottom of the roost. Bats like it better if it is 20’ above ground or even above the tallest vegetation beneath the bat house. Also, try to make sure that it’s a quarter-mile or less for them to get to the water.

A lot of bats end up getting killed by cats. Yes, cats! If your cat does end up killing a bat, then more than likely, the cat knows where the roost is at, and the cat will keep going back to kill off the rest of the bats. That is why it is best to keep your cat indoors, especially during the summer months when bats are taking care of their pups (babies). If you’re able to, try to bring your cat in about a half-hour before sunset until an hour after sunset. This time frame is so that the mothers have time to get food and get back to their roost.

A bat house is meant to mimic bats preferred roosting habitats; they like dead trees that are big with holes or crevices. Spaces under peeling bark provide shelter from predators and harsh weather conditions. Another reason for bat houses to be so high is when they are in a tree they like to be high enough not only for them to take off, but also it protects them from predators such as snakes and raccoons, while also receiving a lot of sunlight. Once you get your bat house up, it may take a year or so before the bats inhabit the bat house because bats are accustomed to changing habitats and are constantly looking for new roosting sites.

Bat houses play a vital role in the survival of bats, providing optimal roosting spots—which, at times, can be very difficult for bats to find. Even so, bats often go unnoticed; they are the top predator for night-time flying insects. Having bats around is very important and very beneficial in controlling the pest insect populations for our farms, gardens, and forests. When you put a bat house up, just remember a few simple steps and you will start to have bats moving into your bat house in approximately a year and you will help save the population of bats.

After you have your bat house in place, it’s very important that you monitor it off and on. Ideally, you would be checking it about once a month. You want to look for things like wasp nests and making sure the temperature levels are where they should be. Make sure that the bat house is not too cold. If the daytime temperatures are consistently cooler than 80 degrees, this is too cold.

On the flip side, if daytime temperatures are consistently above 100 degrees, then the bat house would be too hot. Over time, bat houses will need maintenance no different than with your home. They may need to be resealed or even painted—the best time to do this is during the winter months when the bats are in their hibernation stage.

Bat house success is achieved in areas of diverse habitats, especially where there is a mixture of agricultural use and natural vegetation. Bat houses succeed more in regions where bats are already attempting to live in buildings. The best time to put up a bat house is in the spring. Spring is good because it’s before the bats start to move around and come out of their hibernation stage. If you want to put a bat house up while you are trying to extract bats, make sure that you do it six weeks before the actual eviction if you can.

When building your bat house, you can help bats that have White-Nose syndrome. Bats that are surviving the white-nose syndrome need all the help that they can get to raise their young and help rebuild the population. Also, a bat house provides a place for mothers to give birth to their pups, and it’s a safe place for the pups to be while their mother is out feeding. The pups will stay in the bat house until they can fly on their own. Once they can fly on their own, they will leave the roost but they will stay with the colony.